Cabin 135, A Memoir of Alaska published by University of Alaska Press as part of the Alaska Literary Series, December 2020.

Katie Eberhart has a Master of Fine Arts in Creative Writing from the Rainier Writing Workshop at Pacific Lutheran University, and degrees in Geography and Economics. Katie’s poetry, essays, and articles have appeared in print and online and she has taught writing workshops in Alaska and Oregon, and on a hillside in Greenland. Katie’s chapbook Unbound: Alaska Poems was published by Uttered Chaos Press (2013).

Uunartoq Island, Where the Vikings Soaked, a poem, published in Cirque Journal, #10.2.

Vanishing Acts, a poem, Windfall, A Journal of Poetry and Place, Fall 2014.

Discussion of Unbound: Alaska Poems with Chris Clouart on The Point on KPOV (August 6, 2014).

Walking with Butterflies at the Metolius Preserve. A guest blog post for the Deschutes Land Trust, July 22, 2014.

The Word is Fieldappeared May 6, 2014 as the featured poem on the websiteThe Daily Dose of Lit:Extract(s). 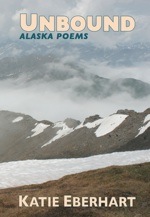 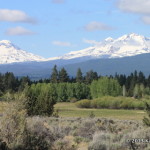 Indian Ford Meadow’s attraction comes from its variety of habitats: pine and juniper, sagebrush, grasses and wildflowers, and a meadow with willows, aspen, a stream, and spectacular views of the mountains. Recently I wandered the meadow on a Land Trust Bird Walk. Our group of eight hikers was led by Carol Wall and hailed from Bend and Sisters, California and Ohio (via Sunriver), and the Willamette Valley. Everyone had binoculars. Some people brought bird books, others had birding apps on their phones. . . .

. . . There are many firsts worth remembering. Seeing bitterroot is one. Last spring, still new to eastern Oregon, I encountered bitterroot for the first time as exquisite pink-tinted blooms the size of my palm scattered across rocky ground as if tossed from a bouquet. Now, in the center of the old road, we saw small clumps of long narrow leaves with waxy white blooms. “Sand lilies,” Mary said. Like bitterroot, the sand lilies grew alone, isolated from other plants by an expanse of stony soil, and for me, like bitterroot, were unforgettable.

Poems in Elohi Gadugi Journal Spring 2013 issue Root & Branch:
Deconstructing Forests
Where Is The Nobility In Accidental Death?
Is Nature Enough?
The Storm—Aftermath

Completed Oregon Master Naturalist coursework and am now working on the volunteer requirement of forty hours per year.

Efficiency is a Force of Nature as well as Economics, Finalist in the 2012 Crab Creek Review Poetry Contest.

ASLE (Association for the Study of Literature & Environment) Off-Year Regional Symposium, Juneau, AK June 14-17: Presentation The Search for Meaning—Writing from the Volunteer Experience.

Northwest Poets’ Concord, Newport, Oregon, May 2012: Writing Workshop—Landscape to Mindscape, Finding Your Writing Territory; Ten minute reading from chapbook A Search for Perfection, The Palouse and Beyond.

The Nature of Words: Storefront After School Drop-in Class on Journal-writing. Twice a week during April. Bend, Oregon.

“Blue whales on starboard” coming from the loudspeakers brought everyone hurrying on deck. The ship slowed and turned and we watched the whales’ leathery-looking fins and thick backs slide above the gray-green water. . .

The Place Where You Go to Listen and Aurora received Honorable Mentions in the Fairbanks Arts Association Statewide Poetry Contest. May 2011.